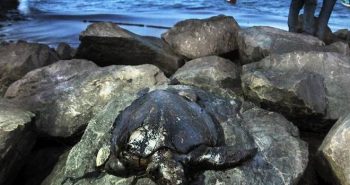 Many fishing hamlets in North Chennai on Sunday witnessed a thick oily tide as an oil tanker crashed with the cargo ship off Kamarajar port in Ennore.  Many dead sea turtles were coated with black oil and   were washed ashore and discovered among the boulders.  Near the Ernavur junction the spread of oil was seen on a 400 metre long stretch some 40 metres wide.  LPG tanker,M.T.BW Maple collided with a ship coming from Mumbai with load of petrol and diesel.  Containment booms were placed around the ships since there was a spill from the oil vessel.  Port authorities on Saturday said there was only a thin sheen from the ships and it would disappear soon but the floating oil along the shore of north Chennai came as shock to the fishing villages.  People watched oil swirling in the waters. “Right beyond Cherian Nagar beyond Kasimedu fishing harbour, we have been smelling oil.  And it has made breathing quite difficult. We feel as if there is a taste of oil in our mouths and we smell of oil,” said a vendor at the beach at Bharathiyar Nagar, where hundreds of residents gathered to watch the spectacle.  The port insisted it had nothing to do with the collision.  The spill was visible in the evening reported the officials of the  TamilNadu Pollution control board(TNPCB) who visited the junction on the Ennore Expressway.  The  type of oil would be ascertained after the tests and the TNPCB engineers said samples had been collected.  A team of experts  from IIT Madras were at the spot.  “We went up to the Kamarajar Port but could spot the oil only at one location.   It does not seem like petrol or diesel but looks like lube or furnace oil.   The samples will be analysed,” a TNPCB official said.