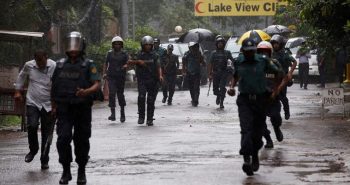 In a big success against terrorism in Bangladesh, Nurul Islam alias Marzan, one of the masterminds of last year’s deadly siege at a Bangladeshi café  was killed during a pre-dawn raid Friday in the capital Dhaka, police said.

Confirming the matter to the Dhaka Tribune, CTTC chief Monirul Islam said: “One of the militants killed in the incident is Marjan. We are yet to confirm the identity of the other militant.”