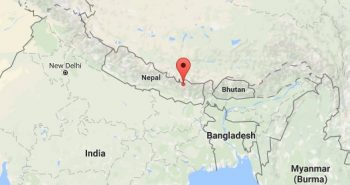 A moderate intensity earthquake measuring 5.5 on the Richter Scale shook Nepal in the early hours today.

According to the National Centre for Seismology, a unit of Ministry of Earth Sciences, the quake occurred at 5.05 am at a depth of 10 km.

Tremors were felt in the eastern districts of Nepal as well as in the north-east part of India.

The epicenter of the earthquake is border of Ramechhap and Solukhumbu districts of Nepal, 131km from Kathmandu.

There was no immediate report of any damage or casualty.

This was the 475th aftershock, of magnitude four and above, of the devastating April 2015 temblor in the quake-prone Himalayan country.