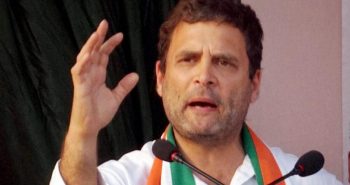 The Narendra Modi government has waived loans worth Rs 1.40 lakh crore owed by 50 rich people but it has refused to write-off Rs 50,000 crore due to the poor farmers, Congress Vice President Rahul Gandhi said today.

Addressing an election rally here, Gandhi said, “I have myself seen the plight of poor farmers who are under tremendous debts. I met the ‘benevolent’ Prime Minister and urged him to waive the loans of farmers worth Rs 50,000 crore, but he declined.”

Seeking to strike a contrast, he said the previous UPA government headed by Manmohan Singh had waived the farmers’ loans amounting to over Rs 70,000 crore within 10 days of coming to power.

The Congress Vice President also accused the Modi government of not fulfilling its electoral promise of tackling unemployment, which he termed as the biggest challenge before the people.

“Prime Minister Narendra Modi has completed more than two-and-half years in office. He had promised that every year, he would give employment to two crore youngsters in the country. But till date, no significant employment has been provided,” he said.

Speaking about the hardships faced by farmers, Gandhi said they get meagre prices for their agricultural produce after putting in days of hardwork.

“Potato is being purchased from the farmers at just Rs 2 per kg. If our government is formed, we would bring down the difference of price (between the raw product and finished product),” he said.

He slammed BJP and BSP and said only the Congress-SP alliance could bring development to UP.

“Five women’s universities would be established in the state, free coaching would be ensured to poor children, loans of the farmers would be waived, and students studying in government schools would get Rs 500 per month, while those who pass class 12th would get Rs 30,000,” Gandhi said.

He also promised that women police stations would be established in every block of the state and reservation would be given to women in police recruitment.

He also said that if his party comes to power in the state Duddhi, a tehsil headquarters would be made a district headquarters.

The agitation to make Duddhi a district headquarters has been going on for the past 5 years.