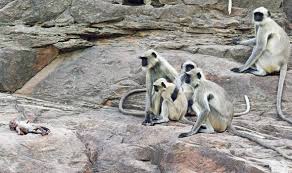 In Mandya district 30 wild monkeys were found dead near a temple.   With the concerned departments and agencies Forest department says it plans to investigate the matter.  On Sunday morning 30 wild monkeys including many babies were found near the Konive Borappa temple at Kere Thonnur,Pandavapura taluk.  Locals later buried the monkey near the spot.  The monkeys were killed elsewhere and their carcasses dumped near the temple.  “We are planning to exhume the carcasses to conduct an investigation,” a forest official told The Hindu on Monday.  The senior officials at Bengaluru and Mysuru have already been  informed about this.The crime scene is trying to be traced out.   Meanwhile, village elders have decided to build a temple for the monkeys where they were buried.  “We worship monkeys as they are an avatar of Hanuman.   So we will raise funds from like-minded people and construct the temple,” said Nanjaiah, a villager.