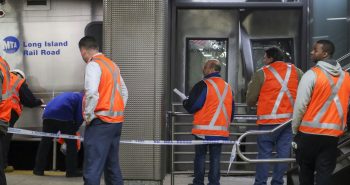 The train had come to the end of the line at the Atlantic Terminal Station in Brooklyn, officials said, but crashed into a small room just beyond the end of the track. It is unclear how fast the train was going.

The Far Rockaway train was carrying about 430 passengers when it crashed through the final bumper on Track 6 at the busy transit hub around 8:20 a.m., causing two of the six train cars to derail, the FDNY and the MTA said.