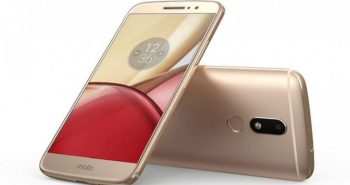 Motorola has confirmed that it will launch its first metal clad Moto M smartphone in India soon.

The company took to Twitter and shared about the imminent launch of Moto M with an image of the phone decorated in Gold. The tweet indicates that, “Something different is coming your way. Stay tuned to know more,” accompanied by the hashtag #ComingSoon.

Moto M sports a 5.5-inch full-HD screen mated on 1080×1920 pixels display resolution. It is powered by a 2.2GHz MediaTek Helio P15 octa-core processor coupled with 4GB of RAM alongside a massive 32GB of native storage that could be expandable up to 128GB via a microSD card. The smartphone has a 16 megapixel rear camera and an 8 megapixel front camera. This dual SIM phone offers dual nano SIM slot, WiFi (a/b/g/n/ac), GPS (with GLONASS, Beidou and AGPS) and a fingerprint sensor.

The phone has Android 6.0.1 Marshmallow operating system  and is said to be backed by a non-removable 3050mAh battery.