MS Dhoni need not prove anything to anyone, says Shane Warne 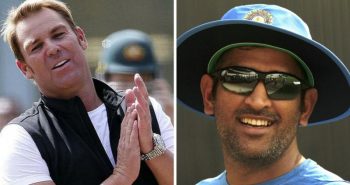 His finishing skills called into question by critics, Mahendra Singh Dhoni on Tuesday received firm backing from spin legend Shane Warne, who feels that former India captain doesn’t need to “prove anything to anyone”.

Removed from Rising Pune Supergiant (RPSG) captaincy before the start of the 10th edition of the ongoing Indian Premier League, Dhoni so far has had a quiet tournament for RPSG by his standards, scoring only 61 runs in five games.

Warne on Tuesday took to Twitter to back Dhoni, who has been a phenomenal limited-overs cricketer.

“@msdhoni does not have to prove anything to anyone, he’s class & a wonderful player in all formats. MS is also a great captain & inspires!,” Warne wrote on his Twitter page.

Dhoni’s strike-rate in the 10th IPL has been a below par 87.14 with an average of shade over 15. He has managed to hit only two sixes in five games.

While he is still the undisputed No.1 keeper-batsman in the limited-overs format but inconsistent form over the past year has led to debate if he is still a potent match-winner.