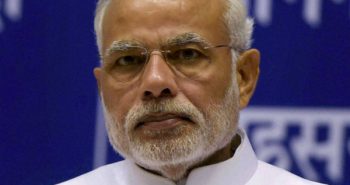 Prime Minister Narendra Modi on Wednesday said the government will take certain initiatives to double the income of farmers in the next five years.

“We want to double the income of farmers by 2022 and for which the government has decided to allow the export of groundnut so that the farmers can get better price this time,” Prime Minister Modi said while addressing the public near Triveni Sangamv in Somnath.

Prime Minister Modi further said the government would help the small fishermen by developing coastline and fishing business, which would come under blue revolution.

Taking a dig at the Congress, he said former Prime Minister Indira Gandhi used to say that banks should be for the poor but it didn’t happen during her regime.

“My government cares for poor and for them we introduced rupay card and jan dhan account,” he added.

Earlier in the day, Prime Minister Modi, who is on two-day visit to Gujarat, offered his prayers at the Somnath Temple and also offered his tribute to the Sardar Vallabhbhai Patel’s statue, marking his seventh visit in Gujarat.

This is Modi’s first visit to the temple after taking over as the Prime Minister in May 2014.