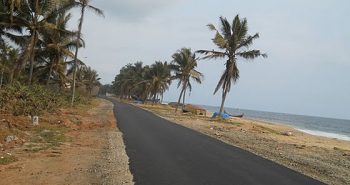 Public Works Minister of Kerala G.Sudhakaran said that for the Coastal stretch development between Aroor and Arattupuzha South,Government has sanctioned Rs.500 crore. On Saturday Mr.Sudhakaran sought the support of the people in materialising the road project. “The people should handover their land voluntarily. The government will not evict anyone forcefully for the road,” the Minister said. He said that 100 bridges have been constructed in the State by Left Democratic Front (LDF) government and its a history. “The government is focused on a development agenda. Since assuming power, we have inaugurated four flyovers in Kochi. Another flyover is being constructed at a cost of Rs. 400 crore. The Alappuzha-Changanassery (AC) road will be redeveloped by spending Rs. 150 crore,” Mr. Sudhakaran said.Roads reconstructed in Cherthala-Thanneermukkom route and 11 refurbished roads were inaugrated by the Minister .The  road, which connects two districts of Alappuzha and Kottayam, was in a dilapidated state for several years. Portion of the road has been strengthened as a part of reconstruction.