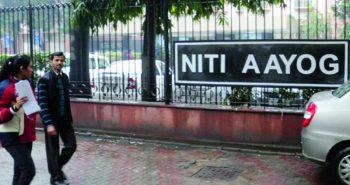 The third meeting of Niti Aayog’s Governing Council began today with the main agenda of deliberating on the 15-year Vision Document to accelerate the country’s economic development.

“#TeamIndia, headed by PM @narendramodi, with Niti Aayog and all CMs, begin their deliberations to take India forward #CooperativeFederalism,” it said in another tweet.

The day-long meeting of the Council is being held at the Rashtrapati Bhavan. Niti Aayog Vice Chairman Arvind Panagariya will make a presentation on roadmap for rapid transformation of India by outlining key aspects of the document, comprising a seven-year strategy paper and a three-year action plan, an official statement had said yesterday.

The Council, which includes all Chief Ministers, Niti Aayog’s members and special invitees, will also discuss the progress made towards the implementation of the Goods and Services Tax (GST) from July 1.

“During the meeting, action taken on decisions of the earlier two meetings of the Governing Council held on February 8, 2015 and July 15, 2015 respectively will be discussed in detail,” the statement had said.