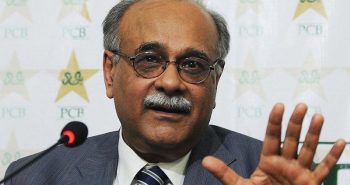 Pakistan Cricket Board’s head of Executive Committee Najam Sethi rules out any possibility of Indo-Pak bilateral series in near future. He says that looking at the current scenario of relation between the two nations, it seems almost impossible to have a bilateral series in the year 2017.

Political tensions between the two countries have affected their cricketing relations.

The BCCI had also decided to request the International Cricket Council (ICC) to not club India and Pakistan in the same group for the 2017 Champions Trophy.

Pakistan’s Sports Ministry too is likely to issue a directive to ban all sporting ties with India. Sethi said if the government issued such directives, the PCB will follow them.

Sethi told reporters on Sunday, “I don’t think it will happen because of the current scenario which will take time to change. But I also don’t think India will avoid playing us in the Champions Trophy next year in England. Look if there is no India and Pakistan match in an ICC event, then financially it will hurt everyone including the ICC and I don’t see that happening since both countries get shares from the world body”.

“But we will only agree to not playing on Indian soil. But if for example, India agrees to matches with us on a neutral venue of our choice, which we host, then we will play them,” he said.