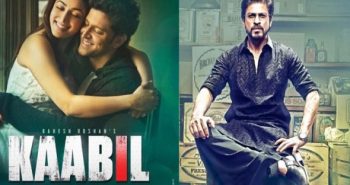 The biggest Box Office clash of 2017 between Raees and Kaabil has been averted. The makers of Kaabil have decided to prepone the release. Earlier scheduled to release on 26 Jan 2017, Kaabil will now release a day earlier as the makers have decided to release the film on the evening of January 25. Thus the makers of Kaabil have avoided the direct clash with Shah Rukh Khan’s Raees which will hit screens on 26 January 2017.

Confirming the latest change in the release date, Rakesh Roshan shared the Telugu poster of the film. He tweeted, “Experience the warmth of a beautiful love story called #Kaabil on 25th Jan. #KaabilTeluguPoster @FilmKRAFTfilms.”

The official Twitter handle of the film shared the news update along with the Telugu poster of the film, “The mind sees all, here’s the #KaabilTeluguPoster. Will hit theatres across India on 25th Jan! Stay tuned”.

Roshans will hold a special Kaabil screening for superstar Rajinikanth