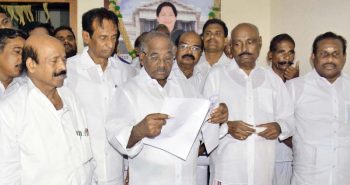 Asserting that they are the “original AIADMK” and the post of General Secretary is vacant, the O.Panneerselvam faction of the ruling party on Sunday constituted the “Governing Council” and appointed E. Madhusudhanan as its chairman.

Though party Gen. Sec. VK Sasikala removed Mr Madhusudhanan from the post and the party, he rejected the move saying the OPS camp was the “original AIADMK” and Ms Sasikala has no powers to remove him since she was only “interim general secretary”.

Since Panneerselvam rebelled against Sasikala, the AIADMK has split into two. The OPS camp has been maintaining that they are the “real AIADMK” and that they will get the “two leaves” symbol of the party. Panneerselvam, Ponnaiyan, V.Maitreyan, K. Pandiarajan, S.Semmalai and other senior leaders have been named to the “Governing Council.” The move by the OPS camp comes in the wake of AIADMK Deputy General Secretary T T V Dinakaran constituting the Governing Council of the party just a few days ago.

AIADMK MLA joins OPS Arun Kumar, AIADMK MLA from Coimbatore North, extended his support to the faction led by O Panneerselvam taking the number of legislators supporting him to 12. Mr Arun Kumar, who had abstained from voting on February 18 when CM Palanisami, met Panneerselvam at his residence here on Sunday and extended his support to him. The OPS faction had the support of 11 MLAs until now while the govt claims the support of 122 MLAs.