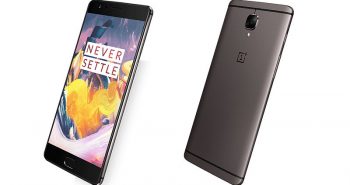 The OnePlus 3T, an incremental update to the critically and commercially acclaimed OnePlus 3 is launching in India today at a launch event in New Delhi at 11:30am.

It comes with Qualcomm’s latest Snapdragon 821 processor (as compared to the 820 in the OP3) clocked at 2.35GHz, the Adreno 530 GPU, 6GB of DDR4 RAM and a 3,400mAh battery. The battery is 13% larger that the One Plus 3, which had a 3,000mAh battery. On the camera front, the device sports the same 16-megapixel sensor as seen on the OnePlus 3. The front camera, however, saw a bump from 8 megapixels to 16-megapixel shooter The OnePlus 3T is running the latest version of OxygenOS based on Android 6.0.1 Marshmallow.