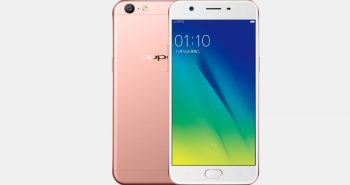 Oppo has launched its all new A57 selfie smartphone in its home market, China. The Oppo A57 is priced at 1599 yuan, which is approximately Rs 15,947 and will go on sale from December 12 onwards.

The highlighting feature of the smartphone is its 16-megapixel of front facing camera with f/2.0 aperture, which is also its USP. Moreover, the Oppo A57 is fronted with a 5.2-inch HD LCD display which is protected by a 2.5D curved glass. It also sports a fingerprint sensor which is placed on the home button of the phone.

On the camera front, the OPPO A57 has a 13-megapixel rear camera with f/2.2 aperture, PDAF, LED Flash It is also backed by a 2900mAh of battery, under the hood.

Running on Android 6.0 Marshmallow, the Oppo A57 is powered by a 1.4GHz Qualcomm Snapdragon 435 processor which is bundled with an Adreno 505 GPU and 3GB of RAM.

Oppo A57 is aided by 3GB RAM and 32GB storage, further expandable up to 128GB via microSD card slot.

The smartphone is made available in gold and rose gold colour variants.