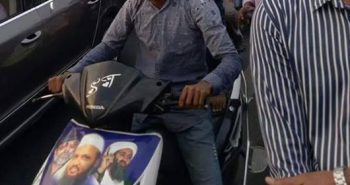 TN government is attempting to discredit the Marina protests and justify police action against the protesters, the government of TN has put forward several theories, one of them being that anti-national elements had entered the protests. As proof, we were shown an image of a man on a bike with a poster of Osama bin Laden. TN CM O Pannerselvam even mentioned this on the floor of the house.

That man from otteri had give an interview clearly saying that he was not a part of that jallikattu protest, and that photo is from a previous protest organized from an Islamic group on December much before the Marina protest.

He clearly says that I was the one in that picture but its not in that marina protest and he also said that I was working on that date even a security camera is placed in my store that may be a proof for you, that I was from 9am to 5pm in my shop only.