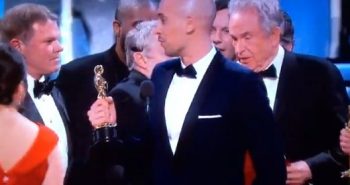 ‘La La Land’ which won six trophies including best director and actress, was incorrectly declared the winner by Warren Beatty and Faye Dunaway.

However, midway through their victory speech, the producers of the musical realised the error and John Horowitz announced that the award actually belonged to ‘Moonlight’.

Many thought he was just making a statement but then he cleared that he was not joking and showed the audience the card which read ‘Moonlight’.

“I want to tell you what happened. I opened the envelope and it said Emma Stone, La La Land. That’s why I took such a long look at Faye and at you. I wasn’t trying to be funny,” a flustered Beatty later clarified.

“Well I don’t know what happened. I blame myself for this,” host Jimmy Kimmel joked after the moment.

“Let’s remember, it’s just an awards show. I mean, we hate to see people disappointed, but the good news is we got to see some extra speeches. We have some great movies. I knew I would screw this show up, I really did. Thank you for watching. I’m back to work tomorrow night on my regular show. I promise I’ll never come back. Good night,” he said.

Adapted by Jenkins from Tarell Alvin McCraney’s autobiographical play ‘In Moonlight Black Boys Look Blue’, the ‘Moonlight’ has been hailed by critics for its humanity in portraying this struggle.

A tender story of a young black man coming to terms with his sexuality while growing in a rough Miami neighbourhood, the film also won Jenkins and McCraney best adapted screenplay and Mahershala Ali best supporting actor trophy.

The small budget film, Jenkins’ second outing after a gap of eight years, entered the competition with eight nominations.

While critics predicted Ali as the sure-shot winner in the best supporting actor category, not many believed that ‘Moonlight’ will manage to ride over the popularity of ‘La La Land,’ director Damien Chazelle’s stunning LA-set ode to jazz and romance that mesmerised Hollywood.

‘Moonlight’ won a Golden Globe for best picture, and Jenkins made history as the first black person ever nominated for Academy Awards for best director, best screenplay and best picture in the same year.

McCraney wrote the play in 2003 after losing his mother to AIDS-related complications and Jenkins said in interviews that he could relate a lot to the story which resonated his own upbringing during the crack epidemic of the 1980s and ’90s.

Apart from ‘La La Land,’ it also beat seven other nominees including Kenneth Lonergan’s ‘Manchester by the Sea,’ ‘Hidden Figures’ and ‘Lion’.