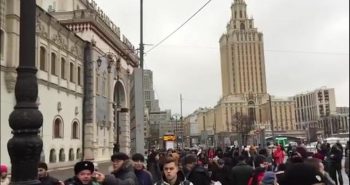 Nearly 3,000 people were evacuated from three Moscow train stations Monday after a phoned-in bomb threat, although police said no bombs were found.

All three stations are located on the same square in central Moscow.

The TASS news agency said police planned to use sniffer dogs to check the Kazansky, Leningradsky and Yaroslavsky railway stations.

It was later confirmed (12.30pm GMT) no explosives had been found in any of the stations.