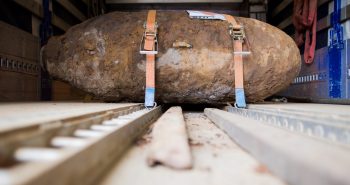 More than 54,000 Germans in the city of Augsburg must evacuate their homes Christmas morning while German authorities defuse a massive 1.8-ton bomb from World War II.

The bomb was uncovered last week during construction work in the city’s historic central district. Police say Christmas Day is the best time to defuse it because there is less traffic and it is more likely people can stay with relatives.

Police rang doorbells and used vans with loudspeakers to urge procrastinators to leave ahead of a 10 a.m. deadline. Traffic into the evacuation zone was halted from 8 a.m. local time.

More than 70 years after the end of the war, unexploded bombs are still found buried on German territory, vestiges of the intense bombing campaigns by the Allied forces against Nazi Germany.