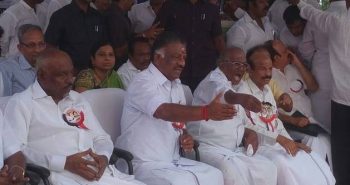 The O Panneerselvam-led AIADMK faction is observing a day-long fast here and in the district capitals of Tamil Nadu today, demanding an independent probe into the death of former Chief Minister Jayalalithaa.

The OPS faction had announced on February 28 that they would observe a one-day fast as the “silence” maintained by the government on the issue was a cause of worry to the people and to the true loyalists of Jayalalithaa.

A 12-member delegation led by Maitreyan had also called on President Pranab Mukherjee in Delhi that day and submitted a memorandum, seeking a probe.

In their memorandum, they sought steps for instituting a probe (a judicial enquiry or a CBI probe), which may be decided by the President.

On March 6, the government had cited reports from Apollo Hospitals and AIIMS to state that Jayalalithaa died on December 5 after a massive cardiac arrest.