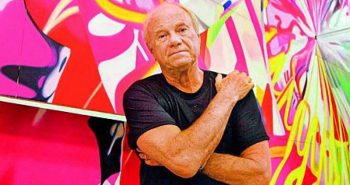 Artist James Rosenquist, a key figure in the pop art movement, has died. He was 83. His wife, Mimi Thompson, told The New York Times that he died on Friday in New York after a long illness.

Rosenquist started by painting signs and billboard advertisements in Times Square and other public places. He later incorporated images from popular culture, from celebrities to consumer goods, into his work.

One of his best-known pieces is “President Elect,” created in the early 1960s. It is a billboard-style painting depicting John F. Kennedy’s face alongside a yellow Chevrolet and a piece of cake.

“The face was from Kennedy’s campaign poster. I was very interested at that time in people who advertised themselves,” Rosenquist told the art appreciation organisation The Art Story. “Why did they put up an advertisement of themselves? So that was his face. And his promise was half a Chevrolet and a piece of stale cake.” Another popular piece was Rosenquist’s “F-111,” which superimposes a Vietnam War fighter-bomber on images of children and consumer goods.