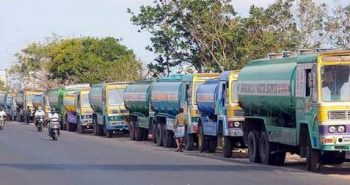 Southern suburbs witnessed second day of strike as private water tanker operators are seeking licence to draw groundwater.  For the past two days many lorries have been parked along the Pallavaram-Thoraipakkam Radial Road and near the Navallur Toll gate.  Recently Kancheepuram district administration seized tankers for extracting groundwater without proper licence.  The distict administration often carried out checks said S. Bharathi, vice-president, South Chennai Private Water Tanker Operators Welfare Association.  In areas such as Adyar and Mylapore nearly 1200 private water tankers ply along the IT Corridor.  The strike has not affected the water supply yet in the areas.  Each lorry operates up to five trips daily and the demand is expected to increase by April.  Members point out that they have to travel 15 km to source water but have not increased the price of tanker loads. While a minimum of ₹1,200 is charged for a 12-kl tanker load, a tanker load of 24 kl capacity can cost up to ₹2,000.