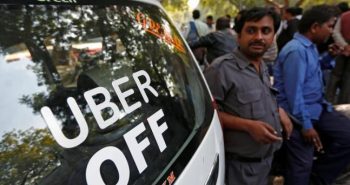 In Mumbai, on Monday  Ola and Uber drivers had staged a protest.  A union led by the Nationalist Congress party comprising over 2,500 Ola and Uber drivers affiliated to the Maharashtra Rajya Rashtriya Kamgar Sangh (MRRSK) went on a strike. Their main demand is a hike in the base fare in all categories which is declining over the years. At Kurla in afternoon approximately 200 drivers participated in the strike. When the protestors reached the Uber ‘s office it was closed said  Mr.Sunil Borker, secretary of the transport wing MRRSK.  “Hence, drivers decided to go on a strike. All the drivers will be offline till the companies come forward to have a dialogue and hear our demands,” Mr. Borker said. General Secretary, MRRSK said there should be a mechanism where the per-km rate that the drivers get from the companies is linked to the petrol and diesel prices. “The condition of Ola and Uber drivers is fast becoming like our farmers’. They are unable to repay their loans, and the policies of the companies are pushing them towards committing suicide,” Mr. Mohite said. Similar to Mathadi workers he demanded that the government create a board for Ola and Uber drivers. Drivers said for several months their average earning per km has come down to Rs.6.  “They keep saying that it is system generated and it can’t be helped. But they have rigged the system. We want the companies to increase the base per km rate to Rs. 18 for the small car segment and do away with the incentive structure,” Sanket Satam, who has been driving for over three years, said. Commuters could experience the effect of the strike. “The driver was nice enough to cancel the trip and said he was looking for a trip to south Mumbai via the freeway as there was a lower chance of a law and order issue there,”  a person said. An Uber spokesperson said, “We regret the disruption caused to our rider and driver-partner community, due to a small group of individuals. We remain committed to serving the city and ensuring that our driver partners continue to access a stable income, while giving riders a convenient, reliable option to get around Mumbai.” When contacted the officials of both the car-hailing companies, they said only a small group of drivers is participating and there are political motivations behind the strike. “We are also getting reports that a few of them are intimidating our drivers,” an official said.