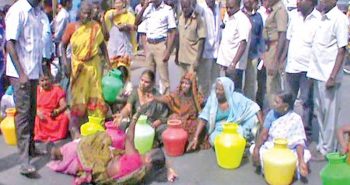 Chennai, Vellore, Kancheepuram and Krishnagiri are facing severe water shortage and the state police are facing a tough time with growing protests.

On Monday, it was the turn of Pammal residents to stage a demonstration with empty pots, highlighting the water crisis situation. Life took a pause for almost half an hour, at Pallavaram-Kundrathur Road, as angry protestors demanded a solution, which according to them, had been unattended for the past two months.
Police personnel, who arrived at the spot pacified the agitators and restored the blocked traffic. Narrating their ordeals, protestors said they had not received water for the past three weeks, prompting them to rely on private water tankers and water cans.

“There is no responsibility on the part of the special officers. Neither the Commissioner nor the Municipal Engineer was present at the office. We found no way, but to protest, to put forth our demands,” said Rajya Lakshmi, a protestor.

Meanwhile residents of Vellore also complained that they were facing acute shortage of drinking water. “Last week, the residents of Bagayam lodged a complaint to Vellore Corporation seeking drinking water supply at least once in three days, but there is no response so far and if the situation continues the residents are ready to stage a road rook,” said S. Arumugham a retired army jawan.

With the water storage level of all reservoirs in red and with all major reservoirs in Tamil Nadu now having less than 13 per cent of their storage level, water managers are now perambulating the agricultural lands in Tiruvallur, Kancheepuram and Cuddalore looking out for borewells. The water available in the abandoned Tirusulam and Maangadu quarries are now being examined for consumption.

Water quality tests are underway and the results are expected. On Monday Poondi received an inflow of 299 cusecs of water released from Kandeluru and the overall storage capacity of all four reservoirs stood at 1.7 mcft against the total capacity 8,108 mcft.

A majority of Pammal residents, who had relocated to this suburb, to enjoy pollution free environment and low cost of living apparently regret their decision. Reason: Civic body’s negligence towards water schemes.

Residents are now forced to spend a major part of their monthly budget to meet water requirements.

The parched locality, with the declining ground water table solely relies on Palar and Chembarambakkam water, which is supplied, once in ten days to 20 days.

Proposed to meet the water scarcity, Pallavaram-Pammal Kootu Kudineer Thittam earmarked at `128 crore is not yet completed.