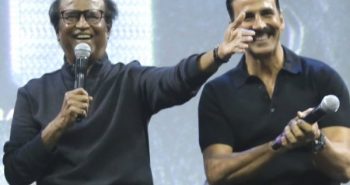 In “2.0” Rajinikanth will reprise the role of ‘Dr Vaseegaran’ and ‘Chitti’ while Akshay, who is the new addition, plays a villain in the sequel of “Robot”.

Rajinikanth was so impressed by Akshay that he said, “Akshay is the hero of the film, if I was given a choice I would have done Akki’s role. Its a brilliant role, character (of Akshay). The whole country will be proud of Akshay”.

Talking at the event, Akshay said: Rajinikanth is not a superstar, he is the entire galaxy. He has got the swag. Director Shankar said my role will be difficult but I enjoyed it. The subject is very unique. I’m sure this film will reach the standards of Hollywood.”

The movie also starring Amy Jackson, Sudhanshu Pandey and Adil Hussain, which will hit the screens worldwide during Diwali 2017.