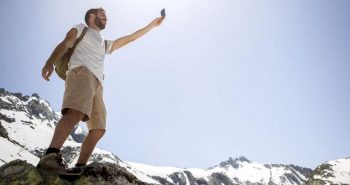 The number of people who die each year taking a selfie is on the rise but a team of US researchers now hope they can tackle the problem.

They are developing an app which will warn people when they are at risk.

The study has been led by PhD student Hemank Lamba and a team of friends at Carnegie Mellon University in Pittsburgh.

Hemank and his team hope to develop an app which will warn thrill-seeking selfie takers when their quest for the ultimate photo is putting their life in danger.

They hope the app will be able to identify when someone is taking a photo at a high point, by train tracks or in other dangerous situations and alert them to the possible risk to their life.

The team have tested 3000 selfies with an algorithm they have developed and claim a success rate of more than 70% when it comes to identifying a risky photo.

According to the report, there are a total of 127 deaths linked to someone taking or attempting to take a selfie between 2014 and September 2016. The researchers found that the greatest number of deaths happened in India with 76, followed by Pakistan with 9 and US with 8.

Taking too many selfies a medical condition, say doctors