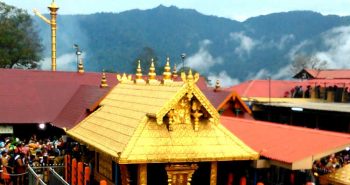 Against  September 28 majority judgment, Ayyappa devotees have filed review petitions. So the Supreme court has fixed hearing on November 13th Tuesday. Women of all ages can enter the Sabarimala temple was the verdict. On Monday before Chief justice of  India  Ranjan Gogoi, the National Ayyappa Devotees Association (NADA) made a mention  and then it was fixed on Tuesday. The court had earlier declined to stay the judgment. It had also refused to hear the review petitions before it closed for Dasara holidays on October 12. “Treating women as the children of a lesser God is to blink at the Constitution,” the Bench had said. It was a “form of untouchability” abolished decades ago; the ban on women was derogatory to equal citizenship. The right to practise religion should yield to the right of dignity of women aged between 10 and 50, the court said.