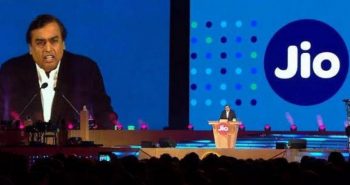 It is a Happy New Year for Reliance Jio. The company’s parent Reliance Industries’ stocks started 2018 financial year on a positive note on bourses. Stocks of RIL surged a 52-week high of Rs 1,380.50 or 4.5 per cent, according to NDTV.

Reliance Industries was trading in the green after the the company announced that it was extending the last date for signing up for Prime membership from March 31 to April 15.

Stocks of other major telecom players like Bharti Airtel and Idea Cellular were trading under pressure and landed in red and they lost 3.3 per cent in early morning trade on Monday.

Last week Reliance Jio had announced it has managed to bag 72 million existing or new customers for its Prime membership in only one month. RIL chairman Mukesh Abani had thanked Jio users in a letter for giving tremendous response to Prime scheme.