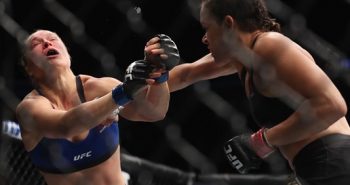 Rousey was stopped 48 seconds into her first fight in 13 months Friday night in Las Vegas, losing to bantamweight champion Amanda Nunes at UFC 207.

Rousey (12-2) never managed to get her footing against Nunes (14-4), who rocked Rousey with her very first punches. Rousey showed little defensive acumen as she staggered and stumbled backward with Nunes relentlessly pursuing her and landing 27 punches in the brief bout.

Referee Herb Dean stopped the rout at 48 seconds of the opening round after Nunes landed an overhand right, followed by a straight left to Rousey’s head.

“She had her time. She did a lot for this sport. Thank you, Ronda Rousey. I’m the champion, the Lion,” Nunes said.