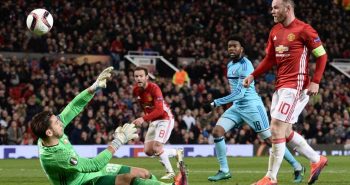 Rooney’s goal in the 4-0 Europa League win over Feyenoord on Thursday night was in the 39th in continental competitions for United, a tally that saw him eclipse Ruud van Nistelrooy as the leading marksman in European games, and it also leaves him just one behind Sir Bobby Charlton’s all-time haul of 249.

Rooney said, “I think people in the media making a big deal over nothing. I actually didn’t even step foot into the wedding and I think it’s a shame that I’m having to talk about it now after such a great victory.”

“It’s a great feeling to score goals and to score goals for this club. So I’m pleased. I’m sure there’s plenty more to come and I’m happy with the win as well as the goal,” he added.