Russia impatient for improved dialogue with US: Putin aide 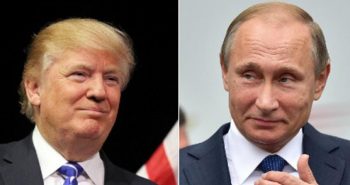 A Russian government spokesman expressed impatience on Sunday that bilateral relations with the United States have not improved more quickly since US President Donald Trump took office.

Kremlin spokesman Dmitri Peskov said his country’s government is eager for improved US-Russian relations, calling it “unpardonable not to be in dialogue,” as Moscow presses the new US leader to make good on vows to improve ties.

“We certainly would expect our contacts to be more frequent, more in-depth, in order to sit and then talk to each other… because we had quite a significant pause in our bilateral relations,” Peskov said in an interview that aired Sunday on CNN’s “GPS” program.

“For countries like Russia and the United States, it’s unpardonable not to be in dialogue, especially against this amount of regional and global problems that we have.”

Earlier this year, Trump and Russian President Vladimir Putin agreed to develop relations “as equals” and establish “real coordination” to fight the Islamic State group in Syria, the Kremlin had said.

Peskov echoed that sentiment in the CNN interview, but urged the US to do more to kickstart the dialogue. Trump is “not hiding the fact that he disagrees in lots of things with Russia, but he’s quite pragmatic enough to say that we have to talk,” Peskov said.

“We have to compare our positions in order to find some common ground,” he said. “At the same time, he says that we have to come together and start our dialogue. And, unfortunately, we don’t have a better understanding on when this dialogue can begin.”

Peskov also voiced concern over the assessment by America’s intelligence establishment that Russia interfered in the US election last year in support of Trump.

Several congressional committees, as well as US intelligence agencies and the Federal Bureau of Investigation, continue to investigate how and to what degree Moscow may have helped Trump score his completely unexpected victory over Democratic presidential nominee Hillary Clinton.

Peskov, however, decried the “hysteria” of the US political debate, and said it is hampering efforts to establish warmer relations.

“We consider it a real danger for the future of our bilateral relationship and we sincerely want to see this hysteria coming to its logic end,” the Kremlin spokesman said.

Trump’s national security advisor Michael Flynn was forced to step down when it was revealed that he misled colleagues about his meetings with the Russian ambassador.

More recently, Attorney General Jeff Sessions recused himself from election-related investigations when it emerged that he too had met the Russian ambassador on two occasions, despite having told lawmakers at his Senate confirmation hearing otherwise.

“There’s a lot of aspects with this whole relationship with Russia and Vladimir Putin that requires further scrutiny, and so far I don’t think the American people have gotten all the answers,” McCain said. “In fact, I think there’s a lot of shoes to drop from this centipede.”

The Smoking Gun website and The Washington Times first reported that Stone and Guccifer 2.0 had exchanged direct messages on Twitter.

Stone corroborated the information and posted screenshots of the messages, in which he said he was “delighted” Guccifer was reinstated to the social media platform after being temporarily banned.

But he said in a post on his website that the messages were exchanged after the Democratic materials were leaked, and that he had “no contacts or communications” with Russian officials or intermediaries.