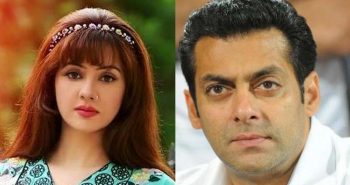 Pakistani artistes have seldom shied away from expressing their dissent of or mocking Indian actors. While old footages of actresses Mahira Khan and Saba Qamar taking jibes the likes of Salman Khan and Hrithik Roshan, the latest to join the bandwagon is singer-actress Rabi Pirzada.

Pakistani film industry, primarily based out of Lahore and popularly known as Lollywood, had blossomed well a couple of decades back. However, the prominence deteriorated gradually, over the years, owing to the audience’s preference of Bollywood films.

Rabi along with Naseem Vicky, has now endeavoured to revive the dying Pakistani film industry, with a brand new film, that has Pakistani core values firmly rooted within.

She said, “Every other film released in Bollywood happens to be about crime or some criminal activities, especially films of Salman Khan. My question is, what are Indian film-makers teaching the youth? It seems like they are just promoting crime. There was a time when Pakistani cinema was at its peak, making films with moral lessons and plots highlighting social ethics. We were educating the society through our films but Bollywood has changed all of that.”

Well, no words were minced and candour was thrown around with abandon.