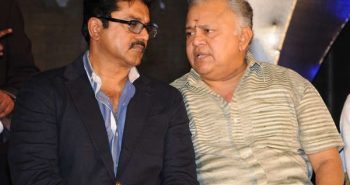 Kollywood Star Actor Sarathkumar & Radha Ravi have been suspended from the Nadigar Sangam organisation over allegations of corruption against them. At the Annual General Body Meeting of South Indian Artistes’ Association (Nadigar Sangam) held on Sunday, an unanimous decision has been taken to remove former President Sarathkumar and General Secretary Radha Ravi.

Office bearers Nasser, Vishal and Karthi jointly backed up the resolution saying, “We have solid proof of both Sarath and Radha Ravi indulging in misappropriation of Sangam funds and malpractices. Hence, after the EC meeting, we sought permission from the entire members who have gathered here to pass the resolution”.

Nadigar Sangam Charitable Trust had approached the Madras High Court in September last in a connected issue. Sangam had petitioned the court to direct the police to register an FIR against R Sarathkumar, Radharavi, and another former ex-officio trustee Vagai Chandrasekar for alleged misappropriation of Rs 1.65 crore of the trust’s funds.