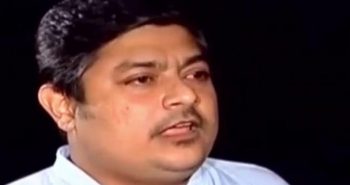 A fresh rebellion seems to be brewing in the Tamil Nadu politics, only days after Chief Minister Edappadi K Palanisamy won a trust vote in the state Assembly.

According to reports, Deepak Jayakumar, Jayalalithaa’s nephew, has staked claim to her Poes Garden residence in Chennai, where Sasikala stayed before her sentencing in the Disproportionate Assets (DA) case.

In an interview, Deepak said, “I will pay the Rs 100 crore fine for my aunt Jayalalithaa. I don’t have money, so I will sell properties. I can’t say which property I am going to sell. But Poes garden belongs to me and Deepa (Jayakumar).”

“Only me and Deepa can enjoy the properties of Jayalalithaa. Nobody else can claim credit to it,” he added.

Incidentally, Deepa herself has mounted a frontal attack on Sasikala, and said she would make an important announcement on Friday.

Deepak was last seen performing the final rites of Jayalalithaa back in December, but was thought to be in the Sasikala camp.

Reports however added that Deepak said he had no political ambitions. He also said he was not against Sasikala’s elevation as general secretary of the party, but only against the elevation of her nephews to the AIADMK leadership.

“They probably forced Sasikala to handover the party to them. No cadre will accept this…I don’t know what made Sasikala take these decisions,” he said of Dinakaran and Venkatesh.

Deepak however supported his sister Deepa’s plans to enter politics. Deepa had declared, in a meeting with Paneerselvam a week ago, that she was planning to join politics.
Deepak Jayakumar also seemed to have a good opinion of the former CM. “I respect OPS. He was a good Chief Minister. I can’t say anything more about him. I support his good administration,” he said.