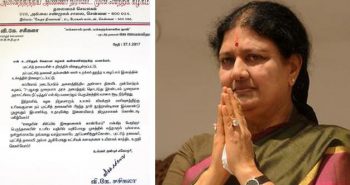 Sasikala is not a General secreteray and she’s only in this post as a temporary general secretary and not only that the general secretary of AIADMK should be elected by the basic members of ADMK, this was said by the Presidium chairman Mr.Madhusudhanan yesterday.