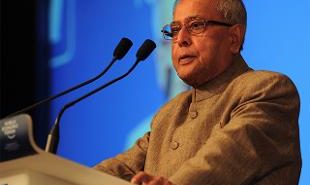 India’s President Pranab Mukherjee said that “India will become a modern eco power in the whole world!” only if the innovative schemes by the government such as ‘Clean India’ and ‘Digital India’ are successfully implemented.

He also remarked that , “India is on beyond the way of Second Green Revolution and right now the country needs to be boosted up by Israel , to increase the productivity in the utilization of the modern technology.”

President Pranab Mukherjee during the inaugural session of 12th edition of CII Agro Tech 2016 here said, “Government has bought new initiatives , which has initiated in every sector , to increase the economic activity particularly schemes such as ‘Make in India’ , ‘Digital India’ , ‘Smart India’ and ‘Clean India’. We have to ensure successful implementation of all these ancient civilisations into a proper and prosperous modern eco power in the entire world”.