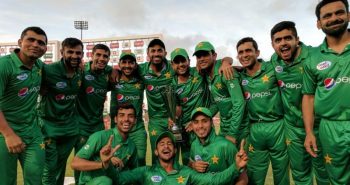 Shoaib Malik hit a majestic six to secure his century and a six-wicket victory as Pakistan swept to a series triumph over West Indies in their third and final one-day international on Tuesday.

After West Indies had reached 233-9 from its 50 overs and then made early inroads into Pakistan’s batting order, Malik (101) and Mohammad Hafeez (81) turned on the style to see the tourists through to 236-4 with nearly seven overs to spare.

Malik reached his total from 111 deliveries with the help of 10 fours and two sixes, with the second one proving to be the match-winner off Jason Holder.

Middle-order batsmen were the driving force of the West Indies innings with Shai Hope top-scoring with 71, Jason Mohammed adding 59 and Kieran Powell chipping with a useful 23 after the hosts had managed only 40-2 after losing openers Chadwick Walton and Evin Lewis.

Hope ground out the runs, scoring only one four and two sixes in his 112-ball knock, which ended when he top-edged a Junaid Khan delivery to Malik.

After Hope’s departure left West Indies on 211-6, Mohammed Amir wrapped up the tail for 22 runs, dismissing Jason Holder and Veerasammy Permaul before running out Devendra Bishoo.

In reply, Pakistan could not have got off to a worse start, with Kamran Akmal being caught in the covers by Powell off the very first ball of the tourists’ innings – whistled down the track by paceman Shannon Gabriel.

More trouble was in store for the visitors in the sixth over, with Holder’s first ball from Ahmed Shehzad drawing a superb catch diving by wicketkeeper Hope to leave Pakistan on 16-2. And at 36-3, after Babar Azam was clean bowled by Gabriel with an inswinger that struck leg stump, the match looked to be under West Indies’ control.

Hafeez had other ideas.

His innings helped turned the match Pakistan’s way, leaving his team on 149-4 with another 20 overs to go when he holed out to deep square leg.

Malik and Ahmed (24) brushed off the West Indies’ bowlers, as Pakistan eased to a convincing victory ahead of the three-test series which starts April 21