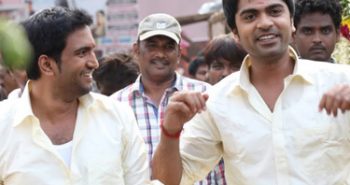 Santhanam took to his Twitter handle to make the announcement saying, its my #Godfather & #Humane @iam_str #str who is gonna be the #MusicDirector for the 1st time for #sakkapodupoduraja #Grateful #Blessed

Simbu too chimed in to say on his micro-blogging page, 1st time as #MusicDirector 4 #SakkaPoduPoduRaja Only for coz it is @iamsanthanam. New journey begins, need your love & blessings. #GodBless

The shooting of Sakka Podu Podu Raja will commence from January. The film, directed by GS Sethuraman, has popular comedians Santhanam and Vivek in the lead roles under VTV Ganesh’s VTV Productions. Vaibhavi Shandilya and Sanjana Singh are playing the female leads in the film. The other cast members include, Sampath, Robo Shankar and VTV Ganesh.