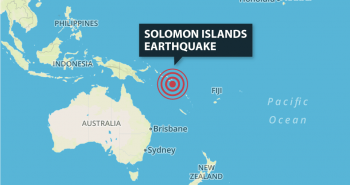 A tsunami warning has been lifted in parts of the South Pacific after a massive earthquake measuring 7.7 hit off the Solomon Islands in the early hours of Friday morning.

The epicentre of the quake, which hit at 4:38am (1738 GMT Thursday), was located 68 kilometres (42 miles) west of Kirakira, a provincial capital in the Solomon Islands, at a depth of 48 kilometres, USGS said.

The Pacific Tsunami Warning Centre (PTWC) had initially warned that hazardous waves of up to three metres could have been generated by the 7.8-magnitude quake.

The Pacific Tsunami Warning Center cautioned that tsunami waves were possible in the Solomon Islands, Vanuatu, Papua New Guinea, Nauru, New Caledonia, Tuvalu and in Kosrae, in the Federated States of Micronesia.

But three hours after the quake struck, the PTWC said, “Based on all available data, the tsunami threat from this earthquake has now passed.”