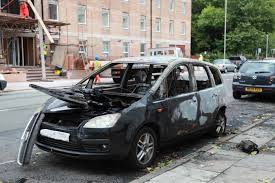 On Sunday night in Delhi a 27 -year-old  Uber cab driver was killed after a speeding BMW car hit his vehicle from behind, near a flyover.  On Monday afternoon Shoaib Kohli the accused driver was arrested.  The victim is a native of West Bengal. He has left his wife and a four year old and a two year old kid behind.  The CNG cylinder in the boot of the cab exploded in the crash.  The BMW car bears a Chandigarh name plate  registered in the name of the mother of the accused.  A person nearby helped him to evacuate.  The accused said he hit the cab as the victim braked suddenly.  But all the passersby and the person who helped the victim claimed that the victim drove slowly.   “I was barely 20 steps ahead of the victim’s car when I heard a loud sound.   I thought it was a bomb blast but when I turned back I saw the taxi spinning on the road due to the impact,” said a passer by.   Once the victim was surrounded by people and traffic halt he immediately fled the scene.