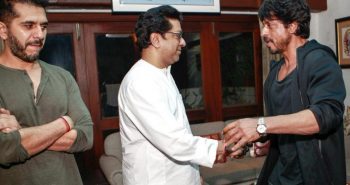 To secure the smooth release of his film Raees next year, Bollywood superstar Shah Rukh Khan met Maharashtra Navnirman Sena (MNS) President Raj Thackeray on Sunday to assure him that Mahira Khan, who plays the female lead in his upcoming film ‘Raees’, won’t be visiting India to promote the film. The actor also promised the MNS chief that he wouldn’t work or engage with any Pakistani artist.

“Shah Rukh Khan met Thackeray at his residence a short while ago and gave his assurance. He has also committed to not engage any Pakistani actors in any of his future film ventures” MNS Chitrapat Sena chief Ameya Khopkar informed the media soon after the meeting.

Khan made this promise during an-hour long meeting at Thackeray’s residence in Mumbai on Sunday evening, The Indian Express reported.

Salman and I will definitely work together in a film: SRK at  Star Screen Awards

No clash between ‘Kaabil’ and ‘Raees’, Kaabil release date preponed