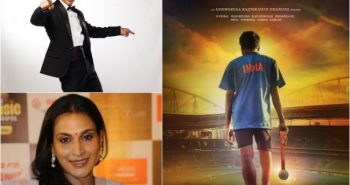 SRK wrote on Twitter, “Here’s presenting the first look of the biopic on #MariyappanThangavelu, our very own national hero, all the best @ash_r_dhanush.”

After SRK’s tweet, Aishwaryaa wished him Happy New Year and wrote, “Thank you so much ! A very happy new year to you and the family. Xx.”

The film, to be shot simultaneously in English, is a biopic on Mariyappan Thangavelu, who won gold for India in high jump in T-42 category during the Summer Paralympic games held in Rio de Janeiro last year.

The first look features the back side of a reel-life Mariyappan in a mud-stained jersey – he holds his gold medal in one hand and is juxtaposed against a stadium. Aishwaryaa’s Mariyappan will release in both Hindi and English