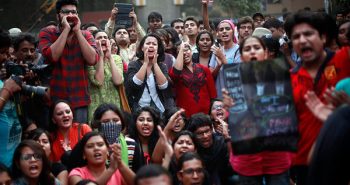 In Karnataka ,the students of a private degree college  staged a protest  on  Monday after a student was allegedly hit by a faculty member during the assembly on Saturday for tardiness.  A final year student of BES college of Education in Jayanagar ,Krishna Yadav was 10 minutes late for the assembly.  One of the HOD’s hit him.Krishna said“I came 10 minutes late.   I was hit in front of everybody.   It is disappointing to see lecturers resort to such measures.”   “We wanted to show solidarity with him as we were disappointed with the manner in which the college has reacted.” said a second year student who was at the protest.  There was no such incident that took place said Prinicipal C.G.Prameshwaraiah.  The introduction of prayer followed by the national anthem about a fortnight ago was the reason for the protest.  As per the principal they are attempting to discipline students by making them stand in line if they come late for assembly.  But students objected to this and protested.  No student was hit.