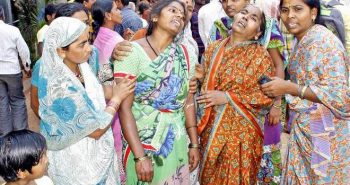 In Belagavi the sudden death of a 13 year old  8th standard student  Prashanth sparked tension and mystery on Wednesday.  Parents and members of various social organizations staged an angry protest on the school premises on Thursday expressing serious doubts of foul play and demanding a proper inquiry into the incident.  The boy was playing in the playground of an adjacent school but within a common premises.  There he collapsed on the ground.  Around 5.30 p.m. two students rushed to  Head  Master’s   chamber and  and told about the boy’s condition.  Head Master Mr.A.S.Desai  directed a teacher to check for the incident.  The unconscious boy was immediately shifted to the nearby cantonment General  Hospital.  The doctors declared him brought dead.  The hospital sources told there were no external injuries on the body.  For post-mortem the body is referred to district government hospital.  A case has been registered by the camp police and investigations are on.  Some of the protestors said there was a fight that lead to his sudden death.  The incident details were not given much by Mr.Desai.