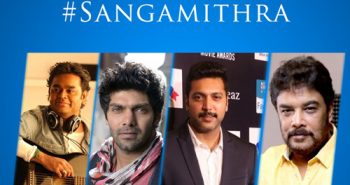 Sri Thenandal Films have officially confirmed that their period action entertainer, with director Sundar C ‘s Rs 150 mega budget will have Arya and Jayam Ravi playing the lead roles and double Oscar-winning composer AR Rahman has been roped in to compose music.

Expressing the excitement, both actors described Sangamitra as their dream project. “Can’t wait to join my buddy love @actor_jayamravi #sundar Sir and @arrahman sir musical (sic) thank you @ThenandalFilms for this dream project(sic),” Arya posted on his Twitter page.

A source from the film’s unit said: “The makers have three big projects in their kitty, including Sanghamitra. Since the pre-production will take months, the plan is to go on the floors by March-April 2017.”

The team will be confirming the rest of the cast and crew.  The film also be made in Hindi and Telugu. Sanghamitra happens to be the 100th film of Sri Thenandal Films.