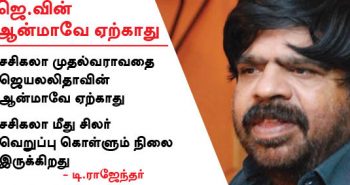 T.Rajendhran shortly had spoken out an report that Sasikala is going to become as the chief minister of tamil nadu, he also continued that if Jayalalith amma’s soul is watching this it can’t take this decision and even it won’t forgive Sasikala on this.

He also said that many people will become angry on Sasikala and this may lead to another protest people will not accept her as a chief minister.