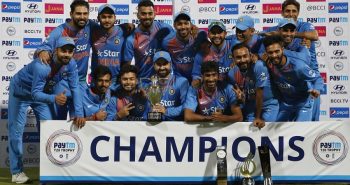 Team India had already won the test and ODI series under virat kholi captaincy, by adding to that glory Indian team have won the T20 series also, and they had made a record, in yesterday’s 3rd T20 match England had won the toss and asked india to bat.

India made a rocking performance by just loosing 6 wickets and scored 202 runs on the board, at starting the run rate gradually increased and after that raina scored 63, followed by dhoni 56 runs and yuvraj singh also gave an entertaining performance 27 runs from 10 balls.

Targeting 203 England team came to the crease and gave a good start, but the bowling performance of bumrah and chahal collapsed the batting line up of opponent team and made a clear and fast victory to the Indian taem. And chahal received both man of the match and man of the series award.