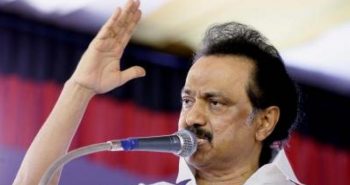 Political leaders on Tuesday expressed strong concern over the death of Dalit student Muthukrishnan in JNU campus and demanded proper enquiry to find out if it is a suicide or murder.

Leader of Opposition M.K. Stalin cited the statement of Muthukrishnan’s father that his son would not have committed suicide and said the views of Delhi police commissioner Sinmai Biswas that he had personal problems could not be accepted.

Stalin also said Muthukrishnan was one of the students who protested demanding justice for the death of Rohith Vemula. His comments in the Face Book about lack of equality in the university indicates the problems in the campus.

Recalling the death of AIIMS student Saravanan from Tiruppur, Stalin said Delhi police were maintaining that the death was a suicide, but the post mortem showed no evidence for suicide. After the post mortem report, an FIR was filed and no one knew about the next stage of enquiry and the murderers were not found. The same Delhi police is saying that Muthukrishnan also committed suicide, Stalin said and demanded a CBI probe into the deaths of Muthukrishnan and Saravanan.

AIADMK deputy general secretary T.T.V. Dinakaran urged Delhi Chief Minister Arvind Kejriwal to carry out an enquiry and bring out the truth. He should bring to book those involved in the incident. The world judges a country by its capital, he said and added that casteist and communal discriminations are leading to the deaths in educational institutions which should teach students to come out of narrow circles like caste, religion and race, he said.

Echoing the views of Stalin, TNCC president S. Thirunavukkarasar too said only a CBI enquiry would bring out the truth and demanded that students of other states studying in Delhi should be given protection.

DMDK leader Vijayakanth asked the central and state governments to conduct an enquiry and find out if Muthukrishnan’s death is a suicide or murder.
CPM state secretary G. Ramakrishnan demanded a judicial probe into Muthukrishnan’s death and demanded a special law in the name of Rohith Vemula to punish those practising oppression and isolation of Dalit students.

Alleging that the death of Muthukrishnan was a result of caste discrimination, CPI state secretary R. Mutharasan called for the unity of secular and democratic forces against such incidents. He also accused the BJP government at the centre of protecting people who indulge in violence against right to freedom of expression.