Tamil Nadu: Man’s ear bitten off in fight over water 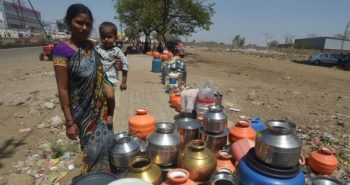 Water crisis has cost a man his ear after it was bitten off by his relative during a bloody fight over drawing additional quota.

The incident occurred here on Tuesday when victim Mahendran got into an argument over seeking excess quota of water from the local tap, which was objected to by Rengaraj, also his neighbour.

Starting off as a verbal duel, the fight for water soon got blown into a fisticuff and in a fit of rage, Rengaraj bit off Mahendran’s ear and spat it out, shocking the onlookers.

The ear piece is since missing as it is suspected to have fallen into a nearby ditch after Rengaraj allegedly bit and spat it out, police said.

In view of the acute shortage of water due to monsoon failure, residents in the locality have got into an understanding on the quantity of water each person can draw from the tap.

When the victim allegedly attempted to violate it by seeking more for himself, it resulted in the bloody episode, they said. Rengaraj has been arrested while Mahendran has been admitted to a hospital, police added.

Tamil Nadu is facing its worst drought in 140 years, resulting in precarious storage levels in all reservoirs including the Mettur Dam.

People have been holding random protests in different parts of the state seeking adequate supply of drinking water.